skip to main | skip to sidebar

Over the last several years there has been a reemergence in the recognition of the role and influence that George Bird Grinnell (1849-1938) had on the preservation and conservation of the American West, on native avian species and the buffalo, and the recording of the stories recounted by members of several of American Indian nations.  These themes have resulted in the rise in publications concerning Grinnell and his activities by authors such as Michael Punke (Last Stand: George Bird Grinnell, the Battle to Save the Buffalo, and the Birth of the New West, 2007), Carolyn Merchant (Spare the Birds!: George Bird Grinnell and the First Audubon Society, 2016), John Taliaferro (Grinnell: America's Environmental Pioneer and His Restless Drive to Save the West, 2019), Thom Hatch (The Father of American Conservation: George Bird Grinnell Adventurer, Activist, and Author, 2020), and  Hugh Grinnell (The Father of Glacier National Park: Discoveries and Explorations In His Own Words, 2020).  All of these publications point to Grinnell’s interest in the natural world as originating from his 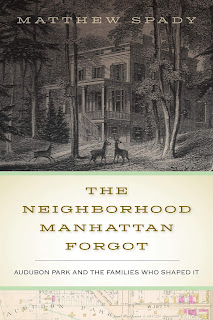 up-bringing and the instruction of Lucy Bakewell Audubon, the widow of John James Audubon, who was his childhood teacher and neighbor in New York’s upper section of Manhattan Island, now the densely populated neighborhood of Washington Heights.  Consistent with my pre-occupation to learn more about this high-profile member of the extended Grinnell family, I pick up a copy of Matthew Spady’s book, The Neighborhood Manhattan Forgot: Audubon Park and the Families who Shaped It (New York: Fordham University Press, 2020), as a way to learn more about the relationship GBG had to his community and neighbors.

Audubon Park was a large parcel of land purchased by John James Audubon in the 1840s as a place to make a home for his family following their return to North American after living in Great Britain during the completion of his massive and influential publication and prints of the Birds of America.  The property was placed in the name of his wife and truly his financial rock, Lucy. It consisted of an untamed natural environment several miles north of the center of New York Cities bustling and expanding business and residential metropolis.  It wouldn’t take long before the Audubon’s found the need to share their wilderness enclave with others and constructed several other houses and cottages on the property to generate badly need cash in the form of rent payments.  The rental property attracted the likes of the growing family of George Blake Grinnell and Helen Lansing Grinnell. George Blake, emerging as a successful businessman and Wall Street broker, desired a place to raise his family of four sons and two daughters that was rural, but in enough proximity for his business dealings in the city. Minnie’s Land, as the Audubon’s called it, was an ideal spot.  Here, George Bird Grinnell, George and Helen’s eldest son, would grow up surrounded by trees, birds, the Hudson River, and all the wildlife that would delight the fascination of the young man who would become one of the nation’s well-known naturalists.  GBE would live in Audubon Park for five decades.

Eventually, George Blake Grinnell would acquire a significant portion of the Audubon property and it would become known as Audubon Park.  In the last four decades of the 19th century, Audubon Park would attempt to stave off the expanding metropolis.  But ultimately, there were many completing interests and with the growth of community intuitions (congregations), mass transportation, industrialization, and many other factors, the bucolic Audubon Park would slowly disappear into the fabric of urbanization.  Eventually, real estate investors expanded the residential population with the construction of apartment buildings and new highways that promoted movement through the area with ease and the former suburban community would become a central part of the urban city.  For a time in the 20th century, the now named Washington Heights neighborhood would experience decay and crime that would only be reversed by the actions of the residents and their dedication to recreating communities within the early 20th century apartment buildings and learning to work together.  This led to recognition of their shared experiences and heightened interest in the historical legacy to the built environment and those that came before, namely – the Audubon's, the Grinnell's, and several others.  Today, this section of Washington Heights is home of the Audubon Terrace Historic District and the Audubon Park Historic District.

Spady weaves together a compelling story of urbanization of a small, yet diverse, area of Manhattan.  He examines the lives of many of the early residents, their often conflicting interests in maintaining a rural space, yet having effective access to the city center.  He brings the community to life by humanizing it.  Understanding the needs of daily life and how those change over time, you witness how a community comes together over needs for clean and usable water, their political voice over placement of mass transit and the priorities for maintaining roadways, their needs for institutions that instill the feeling of community and much more.  Spady’s book reflects many intersections of interests for me:  community development, neighborhood stories, religious institutions, and cultural memory.

With this book, Spady has shown us as historical junkies of urban history how examining the microcosm of one relatively small neighborhood can reveal a great amount of understanding of how our communities expand and contract, while providing a glimpse of how successful communities come together around shared desires for sustaining livable spaces.

David R. Grinnell
The purpose of this blog is to share with my distant family members new or interestng discoveries I have had concerning my genealogical research. Whenever possible I hope to provide followers with the names and locations of source materials that I have used to assemble my genealogy.